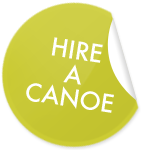 The River Wye traverses much of the border between England and Wales, Glasbury being the highest point at which you can easily launch a canoe or kayak at any time of year. This overlooks the beautiful Welsh Black Mountains, and is a brilliant spot to get on the river. Nearby there is also the Monmouthshire and Brecon Canal – a fabulous alternative to the River Wye. Glasbury has great facilities in the area with the River Wye Bunkhouse, River Wye Campsite and River Wye Activity Centre for a variety of accommodation. For food & drink there is Foyles as well as the River Cafe, both which we would recommend. With easy access to the River Wye, making this a very popular place to start a half day paddle to Hay-on-Wye which is only 5.5 miles or to The Boat Inn at Whitney-on-Wye which is 11 miles.

A brilliant alternative to the river (especially in bad weather) is the Monmouthshire and Brecon Canal, which flows through the heart of some of the most beautiful Welsh countryside.

We are unbeaten on price and quality of service. For our latest pricing structure, click here.

Here is a list of the accommodation we would recommend using if you are staying in the Black Mountains area, Brecon or Glasbury.

Gwennol Glamping A fabulous alternative glamping location in the heart of the Black Mountains.

There are plenty of great places to eat in the Brecon and Black Mountains area! Here are a few of our favourites: